Skip to content
Our last day in New York we spent most of the day shopping – it was good fun although we found that most of it was at designer prices which we didn’t want to payso we didn’t end up buying too much. However, I did manage to get a pair of smart trousers worth £50 for $19 – about £15 including taxes!

In the evening we went to an ice hockey match at Madison Square Gardens. Here is a cool photo: 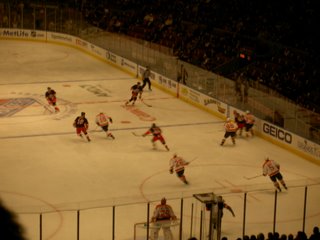 Unfortunately the home team – New York Rangers lost 4-2 to the Florida Panthers. But at least it made Sam feel at home given he supports, the football team, Crystal Palace and they aren’t particularly doing well – 17th in the Championship at the moment! It was amazing to see how much other stuff they put in to their sports games. The game contains three periods of 20 minutes. The first period took over 50 minutes to play with all the player rotation, fouls, and adverts. It is so different to how sport is played in the UK. A really good night though.

On our last day Sam had to go back to work so Sarah, Hannah and I went in search of one of the Christian bookshop. We found quite an impressive shop where I bought a book and Hannah managed to get some groovy little presents for a couple of our young people!

We then travelled out to Newark airport to take our flight to Chicago only to be told that due to bad weather we would not be able to fly and would have to put ourselves up in a hotel for the night and fly the next day. After a bit of discussion they managed to find us another flight but it left JFK airport in less than four hours. We had the craziest taxi journey across the city driving at 60mph with the driver not wearing his seat belt, mobile phone in one hand, and eating with the other, using his elbows to steer us in and out of these huge big lorries. In the end we made it to the airport, sat in another huge queue, but did make it on the flight. In many ways it was better than our original flights as it was direct to Heathrow with no changes and we had a nicer plane to travel in. We also arrived in the UK just before 6:30am instead of the 10:00am we should have originally arrived at.

The Isle of May